Baleton is situated on a peninsula that runs from Gristol's west coast towards the south-west. A river runs through the peninsula and flows into the ocean on the west coast, north of Baleton.

Described as a "timber and fishing town", the inhabitants of Baleton are said to have a reputation for "hard drinking and surprisingly touching poetry."[1] Baleton is also known as a source for exotic potions and medicines, notable of which is a type of poison, known as "Hemlock from Baleton" or "Hemlock Essence". Said essence can be picked up by Corvo Attano and sold on the black market for a modest amount of coin. 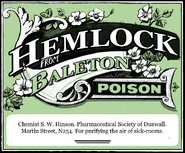 An advertisement for Hemlock from Baleton.