The Back Yard is a location on the property of the Office of the High Overseer at Holger Square. It is accessible during the mission High Overseer Campbell. A compound located behind the Office, it is comprised of several buildings used for the necessary functions of the Abbey of the Everyman:

A door leading to the back yard. 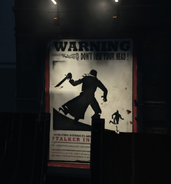 A poster warning of an "unknown assailant" near the entrance to the Back Yard.

Area where bone charms are destroyed.

Door leading to the foyer of the Office of the High Overseer. 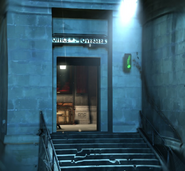 A door leading to the Office of the High Overseer, close-up.

Corvo speaks with Overseer Berthold and his sister upon first entering the Back Yard.

The cage where young recruits are kept.

An outside view of the cage for recruits.

Target practice for crossbows in the workshop.

The postbox and lockers.

Lockers, beds, and a safe. 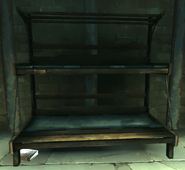 A room in the Back Yard.

Two Overseers attack an Overseer who has contracted the plague.

Corvo kills an Overseer in the Back Yard.

A dead Overseer and a wolfhound's corpse in the Back Yard.

The dock behind the Back Yard.

View of Dunwall and the Wrenhaven, seen from the docks.

The dark figure resembling a body bag seen from the lens on Corvo's mask before vanishing.

The mannequin atop the factory in the back yard.

The black fog left by the mannequin when vanishing.

The training dummy used for the mysterious figure.

Smoke that appears after the dummy blinks away.

The Announcement Room overlooking the Back Yard.
Add a photo to this gallery
Retrieved from "https://dishonored.fandom.com/wiki/Back_Yard?oldid=150681"
Community content is available under CC-BY-SA unless otherwise noted.