By My Hand Alone

Back Alley Brawl is an action challenge in Dunwall City Trials. The aim is to survive for as long as possible while scoring points by killing various enemies types from Dishonored.

"Fight your way through increasingly difficult waves of enemies."

This challenge is a melee-style free-for-all in which the player must fight enemies belonging to the following factions or groups: weepers, the Bottle Street Gang, the City Watch (Watch Lower Guards, City Watch Guards, City Watch Officers, tallboys), Warfare Overseers, along with their wolfhounds, and Whalers . These enemies will also attack and kill those of different factions, though such kills do not grant points. After every couple of rounds, a rune or a "Golden Merchant" (Griff) will appear. The rune will unlock different powers, and attacking the Merchant will drop Elixirs, Remedies, ammo, and equipment (including spring razors and grenades). Killing the Merchant will grant the player equipment upgrades. The game is over if the player is killed.

On the ninth round, the Torturer will spawn. He is an incredibly powerful enemy, and if he is not dispatched quickly via stealth or drop assassination, he can easily wipe out all of the non-City Watch enemies on the wave.

On the thirteenth wave, Daud will spawn. Like in the main story, he will freeze time, so that he and the player may duel without interruption. The player can use this to their advantage, killing as many other enemies as possible before confronting Daud. By using adrenaline attacks, they can allow new enemies to spawn.

The time freeze will last until Daud is defeated, at which point the challenge will continue as an "endless" mode. The game will continue until the player dies. Periodically, Golden Merchants will spawn, as well as Torturers, tallboys, Musical Overseers, and any other enemy previously encountered in this mode excluding Daud.

If the player is low on health, try letting the enemies in a wave kill each other first. The player will miss out on some points, and high-value enemies, such as assassins, will often end up dead by the end of it due to the City Watch's access to pistols, but surviving until wave thirteen should be the primary objective. Since wave thirteen is infinite, any points lost in earlier waves can be made up.

Targets should be killed as quickly as possible. If a target dies by someone else's hand, the player will not receive points.

Play cautiously. There is a point bonus for not taking damage in a wave, and losing a large amount of health can cause serious problems for the player, as the Golden Merchant rarely grants more than one health elixir per appearance. Sneak, if it is possible. The player will receive bonus points for stealth, and it will be harder for enemies to detect them.

The player should make sure to keep an eye on their ammo. It is best to use a sword for rounds with easy enemies, so that ammo can be saved for harder enemies, such as the assassins and tallboys that show up in later rounds.

The player will gain extra points for creative uses of their powers, spring razors, and other parts of their armory. This includes Blink assassinations, knocking enemies off of roofs or into the Void with Windblast, killing enemies with grenades or using Devouring Swarm.

It is advisable to remain on the rooftops between waves. Enemies will not immediately spot the player, and it will be easier to avoid being trapped between two groups. The height advantage can also be used to quickly eliminate powerful enemies. So long as the player is crouched and away from the ledge, assassins who spawn on the same roof as the player will not immediately spot them, so a stealth-kill is possible in this situation.

When dealing with a Torturer, it is inadvisable to face him head on. Instead, either work up enough Bloodthirst to sync-kill him (be careful not to mouse-spam if with Bloodthirsty II, as the double-slash it uses will not kill him), stealth kill him, or drop-assassinate him. All of these options provide a way to one-hit kill him and are easier than they seem, because he will almost always be seeking out other targets if the player is not immediately visible.

Daud is more difficult to defeat, but unlike the Torturer he only spawns once. Fighting him is much the same as it is in the main story. His attacks are very quick, but blocking them with good timing will put him off balance and open him up for a critical strike. Something that is noteworthy: a lot of enemies do spawn with Daud, but because he freezes time they are unable to defend themselves. It is best to quickly assassinating them all before dealing with Daud himself.

Use elixirs only if health is running low. They are quite rare, even in the thirteenth wave when the Merchant begins to pop up every few kills.

Assassins will usually fire off a single crossbow bolt before descending to ground-level to fight. They rarely survive very long after that, as the City Watch guardsmen's pistols alone are enough to one-hit-kill them.

In the thirteenth wave, priority should be given to obtaining the Golden Merchant's supplies, followed by eliminating Musical Overseers, then Torturers or tallboys. After that, the player should use their own discretion. 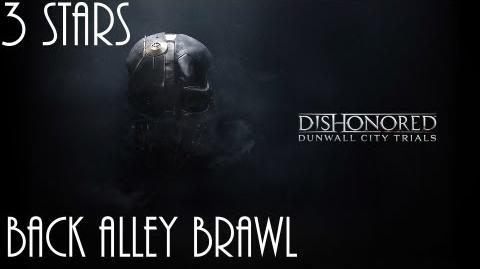 Dishonored Trials of Dunwall, Back Alley Brawl (No commentary)
Walkthrough.

Retrieved from "https://dishonored.fandom.com/wiki/Back_Alley_Brawl?oldid=135160"
Community content is available under CC-BY-SA unless otherwise noted.