An audiograph player is an apparatus used to play audiographs.

Audiograph players are self-powered, simply involving the push of a button to be turned on and off. They can both play and record audiographs and are mostly seen in the possession of the more economically secure citizens of Dunwall and Karnaca. To play an audiograph, the sheet is placed into the top of the machine, and when the player is activated, the paper is pulled through the slot.

There is no mention of how audiograph machines work, but audiographs have holes punched into them and when put into the player, they are converted into sound. When recording, the machine punches holes into the sheet as the recorder speaks. By 1852, recorders found commonly in Dunwall are manufactured by AudioLog and their sheet by Sokolov Industries, while those in Karnaca are the work of Jindosh Clockworks, a company owned by the Grand Inventor Kirin Jindosh.

Audiograph machines are used to record journals, music, miscellaneous thoughts, and even books. Various people record audiographs, leaving them in their players, and Corvo Attano, Daud and Emily Kaldwin are easily able to listen to them.

Pendleton stands in front of his audiograph player.

Anton Sokolov finishes a recording on his audiograph player.

An audiograph player in Samuel's shelter. 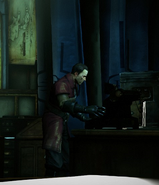 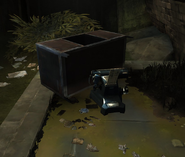 Lord Pendleton's audiograph player sits in the sewers below The Hound Pits Pub.

Back view of an audiograph player.

A close up of an audiograph player. 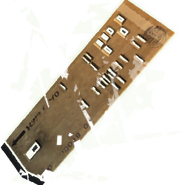 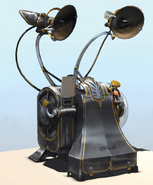 Jindosh Clockworks' audiograph player.
Add a photo to this gallery
Retrieved from "https://dishonored.fandom.com/wiki/Audiograph_Player?oldid=163317"
Community content is available under CC-BY-SA unless otherwise noted.