Dishonored Wiki
Register
Don't have an account?
Sign In
Advertisement
in: Spoilers, The Knife of Dunwall Characters, Male Characters,
and 3 more
English

"Please pay attention! Who are you, a kitchen worker? A grounds keeper? This is the chance of your miserable lifetime!"
—Arnold Timsh berating Daud in Coldridge Prison

Arnold Timsh is a character featured in The Knife of Dunwall. He is the corrupt City Barrister of Dunwall under the regency of Hiram Burrows, who attempts to keep his niece Thalia Timsh from inheriting the family fortune by hiding her ailing grandmother's will, which Thalia tasks Daud with retrieving. Timsh is the assassination target of the mission, Eminent Domain.

A lawyer by trade, Timsh used to work as a maritime Barrister in Dunwall. He notably provided Bundry Rothwild with his whaling license and later plotted with the businessman to sell part of the slaugherhouse's supply of whale oil, violating the Lord Regent's whale oil ban. He was elevated to the position of City Barrister by Hiram Burrows after the death of the empress Jessamine Kaldwin to serve as a liaison between the government and the Dead Counters of the City Watch. His position was created in order to restore the evaluated assets left behind by victims of the Rat Plague to their next of kin, or in case there was none left to seize them for the government. An audiograph found in Timsh's office at his estate reveals that he frequently abuses his power, seizing the property of families who were not victims of the plague and turning it over to his friends and business associates. He personally has immunity from property seizure via a decree from the Lord Regent, which he keeps on his person at all times.

Provided that he was not assassinated, Timsh later goes to prison. During his imprisonment Timsh is completely delusional about his situation. He can be witnessed threatening the guards using what he feels is his position of power and authority and can be heard shouting, "None of you understand what I can do to you. It's almost laughable isn't it? When you think about it? You're signing your own death warrant". He also threatens to add particular guards' names to a signed notarized deposition, which he has apparently sent word of to the Lord Regent's office. He is insistent that there has been a terrible mistake and that once it is cleared up he will gain control of half of the city.

Canonically, Arnold Timsh was arrested and sentenced for life. Since then, his niece Thalia rose among the Dunwall aristocracy, pulling her family with her while building her own reputation.[1] 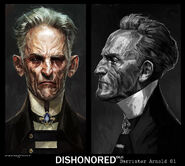 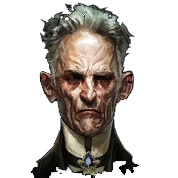 Timsh's portrait as an assassination target. 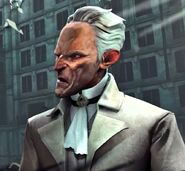 Timsh stands in front of a painting.

Timsh and Melissa in his quarters. 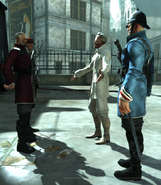 Timsh with his bodyguard and General Turnbull. 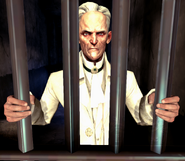 Timsh cowering in his cell with another prisoner.

Timsh standing in his prison cell.