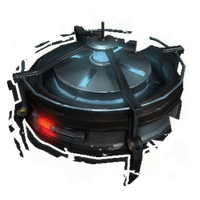 "Lovely and terrifying, with nothing left to wipe up."
—Hiram Burrows[1]

Arc mines are powerful proximity-based mines that will incinerate anything unfortunate enough to get caught in its attack radius. The effect is similar to a wall of light or arc pylon. Daud has access to these devices in The Knife of Dunwall and The Brigmore Witches DLC.

Originally a weapon designed for the City Watch to use against striking employees at the Rothwild Slaughterhouse, by 1852, the arc mine had all but disappeared. The preference was for the spring razor, a weapon that does not rely on whale oil. Stun mines, a non-lethal version of the arc mine, are still in use.

Concept art for the arc mine.

The icon for arc mines.

An exploding arc mine.

An Overseer is vaporized by an arc mine.

Butchers being incinerated by an arc mine.

A guard is zapped as he runs for the alarm.
Add a photo to this gallery

Retrieved from "https://dishonored.fandom.com/wiki/Arc_Mine?oldid=148707"
Community content is available under CC-BY-SA unless otherwise noted.