A Crack in the Slab

"Aramis Stilton. Born in squalor on the Isle of Morley. Now he runs most of the mines in Karnaca."
—The Heart on Stilton[1]

Aramis Stilton is a Karnacan mine baron who disappeared before the events of Dishonored 2. His disappearance led to the collapse of the Batista Mining District, as the new Serkonan Duke, Luca Abele, seized control of the mines and doubled work for his own profit.

His home was used by the Duke and his inner circle, involving a séance to bring Delilah Copperspoon back from the Void.

Stilton's disappearance is investigated in the mission A Crack in the Slab, in which either Corvo Attano or Emily Kaldwin enters his formerly luxurious mansion, now dilapidated.

Stilton was born in the Month of High Cold[2] in Morley[1], to a very poor family living in Caulkenny.[3] He moved to Karnaca with hardly any money and an unfulfilled promise from his mother to follow him shortly.[2]

Stilton worked his way up from being a miner before becoming the owner and manager of Stilton Mines, the silver mines at the edge of Karnaca. His mansion is located in Batista, sealed off by the Jindosh Lock.

The miners generally like Stilton because he worked with their families and he did not drive them too hard. Stilton provided his workers with benefits as an annual holiday and constantly attempted to improve the working conditions in the silver mines,[4] also defending them against the likes of Luca Abele, who wants to exploit the miners in order to harvest more silver. He also invented a kind of mask to stop the workers breathing in so much dust[5] and had plans to prevent the older tunnels from collapsing.[6]

Stilton is a friend of Theodanis Abele and Meagan Foster.

In 1849, Stilton allowed Duke Abele and his followers, Breanna Ashworth, Kirin Jindosh and the Crown Killer, to hold a séance in his mansion despite not being particularly favorable towards the idea. On the Duke's urge, Stilton took part as well, but when Delilah was called from the Void, he was unable to comprehend what he saw and lost his mind. The Duke tasked Kirin Jindosh with creating a lock to keep Stilton in his mansion and employed the Howlers to provide Stilton with food and supplies.

When the protagonist enters the mansion to find information on Delilah's immortality, the protagonist soon finds the insane Stilton in a nearby room, playing the piano. Realizing that no information can be obtained from Stilton, the protagonist leaves him behind to search the mansion. With the Timepiece, the protagonist can change the time, traveling back to the night of the séance. Here, Stilton can be found at the gazebo in the back yard. If he is knocked out before he can attend the meeting, this changes the present as Stilton has not seen the séance and has thus not gone mad. His house will be a much more picturesque place in the present, filled with people going about their daily duties (though no Grand Guard will be present).

Should Stilton be murdered in the past instead, his house is still restored in the present but deserted of people (there will be a note from the new owner on the desire to sell).

If Stilton is saved, the Dust District will be restored to its former glory under his leadership. He can also be found aboard the Dreadful Wale at the beginning of the mission The Grand Palace, informing the protagonist about a secret path into the Duke's vault.

Depending on the protagonist's choices, Stilton can later become a member of the new Duke's grand council.

Aramis Stilton in the past. 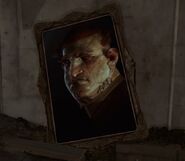 Portrait of Aramis Stilton.
Add a photo to this gallery

Retrieved from "https://dishonored.fandom.com/wiki/Aramis_Stilton?oldid=165798"
Community content is available under CC-BY-SA unless otherwise noted.