Royal Physician
Head of the Academy of Natural Philosophy

"I had a flask in my studio. Had I known I'd be leaving I would have grabbed it."
—Anton Sokolov

Anton Sokolov is the Head of the Academy of Natural Philosophy and Royal Physician to the Empress and then the Lord Regent. In addition to being a highly prized painter, he is a prolific inventor and is the primary source of Dunwall's militarized technology encountered throughout Dishonored. He also created Sokolov's Elixir, which restores health and staves off the dangerous effects of the rat plague.

An immigrant from the nation of Tyvia,[2] Sokolov established himself as a painter and sculptor to the aristocracy of Dunwall at an early age: Vera Moray claims that he painted her portrait when he was "just barely a man, so young," and that he was already "painting all the best people across the land."[3] It became fashionable for members of the aristocracy to pay exorbitant amounts of coin to have their portrait painted by him; Sokolov continued to deliver, despite his contempt for them.

Sokolov thereafter began to establish himself as a master of many disciplines; by the beginning of Dishonored, he is a widely-known painter, sculptor,[4] scientist (with specialties in vivisection[5] and cosmology[6]), inventor, writer,[7] world traveler,[8] and philosopher. Deemed a flatterer by some, he rose through the ranks to become the Head of the Academy of Natural Philosophy and Royal Physician to the Kaldwins in 1822. Two years prior to receiving his position,[9] following the discovery of the potential of whale oil as an energy source, Sokolov partnered with Esmond Roseburrow to create new technical marvels, acting as a key player in Dunwall's industrial revolution.

In the interceding years, Sokolov waged an intense rivalry with Piero Joplin, going so far as to get Piero removed from the Academy. He also took on Delilah Copperspoon, a baker in Dunwall Tower, as his apprentice in 1828.[9] Little is known about their relationship, and Delilah abandoned the position prior to the events of Dishonored.

Sokolov maintained a longer-lasting relationship with Jessamine Kaldwin, whom he admired despite his aversion to the aristocracy. Jessamine was greatly influenced by Sokolov, according to the Heart, and allowed him a great degree of social freedom under her rule.[10] It was during this time that Sokolov invented the Wall of Light and the Arc Pylon for the City Watch in 1833 and Tallboys in 1836.[9] These technologies were not used widely until 1837, after the Empress's assassination.

Following Jessamine's assassination and Hiram Burrows' ascent into the position of Lord Regent, Sokolov continued to enjoy the privileges of his position, as his inventions were very useful in the following time of chaos and strife. Sokolov enjoyed a close relationship with slaughterhouse owner Bundry Rothwild, inventing the Arc Mine and designing an interrogation chair that administers electric shocks to its victim, both of which were to be used against striking workers at the Rothwild Slaughterhouse.[11] Sokolov was given free roam of the slaughterhouse in exchange for access to the whales, which acted as excellent vivisection subjects,[12] and also in the hopes that he would continue to make improvements to the machinery,[2] and indeed, the natural philosopher installed an electrical system used to quickly kill a dying whale,[13][5] and designs were made solely from Sokolov's "mere utterances [...] as he commented sourly on the lesser devices used in previous years" to construct new buzz-saws for the slaughterhouse butchers.[2]

In his spare time, Sokolov is a drunkard and womanizer, as well as a wishful practitioner of black magic. He is obsessed with the Outsider, so much so that he attempts rituals and sacrifices in order to summon him, but to no avail; the Outsider does not find him "interesting enough" to be worth meeting.[14]

"My time is greatly in demand, I assure you. The work is constant, lecturing at the Academy, painting portraits of the gentry, or supervising the installation of a new security system somewhere in the city. So if I spend a night or two at my home on Kaldwin's Bridge, pursuing my own pleasures, you'll have to forgive me. Or don't. It matters nothing to me."
—Royal Physician Anton Sokolov, Academy of Natural Philosophy[15]

Following the assassination of the Empress, Sokolov retains his position as Royal Physician under Hiram Burrows, who commissions him to create weaponry for the purposes of social control. He also continues research on a cure for the rat plague derived from his health elixir. With little consideration for ethics, he intentionally infects healthy citizens to research the plague; one of them can be found imprisoned in his greenhouse, along with an audiograph containing his observations in regard to her.

Sokolov is kept under close observation by Burrows, due to his critical scientific work and strategic value. Nevertheless, by the order of Farley Havelock, Corvo abducts Sokolov from his safehouse on Kaldwin's Bridge for interrogation at The Hound Pits Pub on the identity of Burrows' mistress.

Following his confession, he is kept in the kennels at the Hound Pits Pub. Later events lead Sokolov and Piero to reconcile their differences, with Piero noting that "it's refreshing to converse with someone on my own level," and Sokolov conceding that, "[Piero's] expulsion from the Academy was a crime against natural philosophy itself."

In the low chaos ending of Dishonored, if both Sokolov and Piero survive the events of The Loyalists, they establish a partnership and together find a cure for the rat plague. 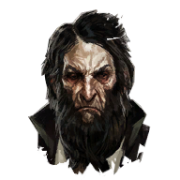 "Light Along the Inverse Curve, Sokolov's Self Portrait."

Sokolov speaking to one of his test subjects.

Sokolov and his test subject.

A wanted poster featuring the abduction of Sokolov.

Sokolov tries to bargain with Corvo before he is captured.

Sokolov in his cage. 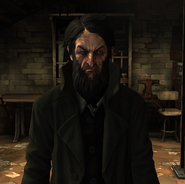 Piero and Sokolov after reconciling.

Sokolov and Piero take refuge in the workshop. 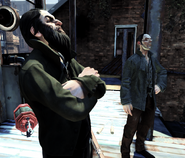 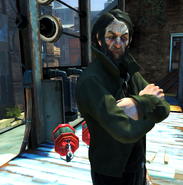 Piero and Solokov cure the plague.

Low chaos ending, but Piero and Sokolov are dead.

Anton Sokolov, working on his elixir.

Sokolov's tarot card in the Special Edition Tarot Deck.
Add a photo to this gallery

Retrieved from "https://dishonored.fandom.com/wiki/Anton_Sokolov?oldid=109026"
Community content is available under CC-BY-SA unless otherwise noted.