Amadeo Monte is a minor character who appears in Dishonored 2. His corpse can be found in the Overseer outpost at the Campo Seta Dockyards in Karnaca.

Amadeo was an artist and made his living drawing advertisements and portraits for the local newspapers. He was also a worshipper of the the Outsider and numerous heretical paraphernalia including an Outsider Shrine, runes, a hidden bone charm, and a portrait of the Outsider himself can be found in his apartment.

At one time, he visited the Crone's Hand Saloon where he literally lost his shirt in a game of dice. It was there that he first came to the attention of Mindy Blanchard, the lieutenant of the Howlers Gang. Sporting numerous tattoos, the young artist was sought out by the gang member as she shared an interest in the hobby.

The two met up again at the Crone's Hand and had planned to continue their friendship when Amadeo came to the attention of a branch of the Warfare Overseers stationed in Karnaca. Amadeo was captured, tortured for information at the hands of the zealots, and died from his injuries.

During the time Corvo Attano or Emily Kaldwin arrives at Karnaca to follow up on the Crown Killer murders, they can approach Mindy Blanchard who will then task them with retrieving Amadeo's corpse for her in exchange for a favor. His body is held in an interrogation chamber within the Overseer Outpost located in Canal Plaza.

The outside of Amadeo's apartment. 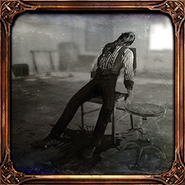 Dishonored 2 achievement showing Amadeo.
Add a photo to this gallery

Retrieved from "https://dishonored.fandom.com/wiki/Amadeo_Monte?oldid=149277"
Community content is available under CC-BY-SA unless otherwise noted.