Alistair Fletcher is a minor character in Dishonored 2. He works as a shipwright and owns his own company, Fletcher and Daughter. His greatest accomplishment is the ISS Jessamine Kaldwin, launched in 1852.

Fletcher is a wealthy man, running the Fletcher and Daughter business, such a renowned company that they were hired to build the ISS Jessamine Kaldwin, named after Empress Emily Kaldwin's late mother, Jessamine Kaldwin. He lives in the Campo Seta Dockyards with his daughter, Philly, who is also a shipwright. There, in his combined office and residence, he designs and builds ships, a passion as well as a job. During the events of Dishonored 2, most of his home is blocked off due to the turbulent occurrences across the Empire of the Isles.

Fletcher was in Dunwall for the launch of the ISS Jessamine Kaldwin, but returned to Karnaca shortly afterwards. His cousin, Rebecca Fletcher, lives in Dunwall, and sent him a letter expressing her sadness over the unpredictable future of the ship, currently sitting in Dunwall Harbor.

During the mission Edge of the World, Fletcher is in his home at the Campo Seta Dockyards. His home contains models of whaling trawlers, a large, framed copy of the blueprints of the ISS Jessamine Kaldwin and two paintings of its launch, mementos of his proudest moments. If approached by Emily or Corvo Attano, Fletcher will warn the protagonist to leave his house, and will flee if ignored.

Fletcher taking in the view of the ocean. 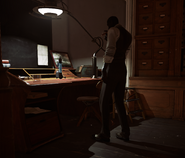 Fletcher smoking in his office. 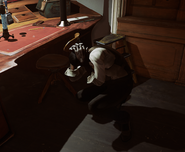 Fletcher trying to hide from the protagonist.

Fletcher in his office.

The sealed entrance to the offices of Fletcher and Daughter.

A model of a whaling trawler in Fletcher's residence.

One of the two paintings in Fletcher's home about the launch of the ISS Jessamine Kaldwin.

The blueprints of the ISS Jessamine Kaldwin, drawn by Fletcher's company.
Add a photo to this gallery
Retrieved from "https://dishonored.fandom.com/wiki/Alistair_Fletcher?oldid=166299"
Community content is available under CC-BY-SA unless otherwise noted.