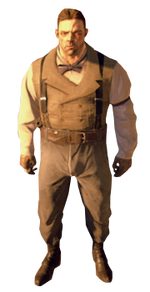 "Come to think on it, there aren't that many honest men left these days."
—Alec, upon reaching his destination

Alec is a minor character who appears in Dishonored during the mission The Royal Physician and offers a side objective.

Alec is a thug and a member of the Bottle Street Gang assigned by Slackjaw to work the area around Kaldwin's Bridge. Along with others of his ilk, he is tasked with selling Slackjaw's bootleg elixir.[1]

In addition to his normal duties, Alec also supplements the coffers of the Bottle Street Gang by collecting pearls from river krusts in the area. While not an expert on the crustaceans, he has learned a good deal about them and can direct others as to the best methods of eliminating the creatures.

Although he is not the leader of the Bottle Street members stationed at Kaldwin's Bridge, Alec is a well respected member of the gang, such that most of the common thugs will listen to his directives or come to aid him if they can.

Shortly before the arrival of Corvo Attano on Kaldwin's Bridge, the City Watch installed arc pylons around the area. Alec was directed to scout Drawbridge Way to investigate the new technology. While doing so, he was apprehended and locked in a cell under the second tower of the drawbridge.

Should Corvo come across the imprisoned thug, Alec will ask the man "with the Mask and hand tattoo" for assistance, offering Corvo half of the river krust pearls he has accumulated. He will lie about his predicament and say that he merely collects the pearls, as opposed to working in a gang, and that the Watch is shaking down "honest men" such as himself. He and his gang then ambush Corvo at the end of the path.

Alec waits for Corvo to clear the area of river krusts.

Alec imprisoned by the Watch on Kaldwin's Bridge.

Alec waits for Corvo to open the gate.

Alec preparing to fight Corvo.
Add a photo to this gallery

Retrieved from "https://dishonored.fandom.com/wiki/Alec?oldid=128982"
Community content is available under CC-BY-SA unless otherwise noted.