Alarms can be found in guarded places all throughout Dunwall and Karnaca. They are used by hostiles to call for help or reinforcements.

An alarm consists of four large bright red cones that are triggered by the turning of a wheel, which is designed upon a ship's helm. The alarm is powered by a large circular turbine or rotary device at the base of the structure; the outer casing of the turbine displays the words "Alarm Property of City Watch" in red writing. The turbine can also be heard powering-up momentarily before the alarm sounds.

There is a small light mounted on top of the alarm, which signals the device's current state. The light is yellow if the device is 'ready,' the light is red if the alarm is actively ringing, or 'on,' and the light appears blue if the alarm has been rewired. The small whale oil tank-like device will also display these same colors, respectively. 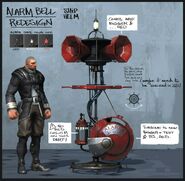 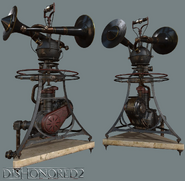 Concept art for an alarm in Dishonored 2.

Concept art for an alarm for Dishonored 2.

Alarms mounted on the wall at Coldridge Prison.

A guard that tried to go for the alarm. 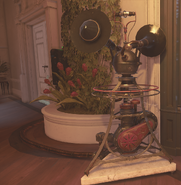