The Addermire Institute of Infectious Disease, normally called Addermire Institute for short, is a former solarium, converted into a research facility for various diseases, located on an island in Karnaca Bay, south of the Campo Seta Dockyards in Karnaca.[1] Doctor Alexandria Hypatia is the chief alchemist of the Institute.

The Institute is visited during the third mission in Dishonored 2.

The Institute is a former solarium for wealthy citizens of Karnaca. It has been turned into a research institute for infectious disease in 1845, led by Doctor Hypatia.[2] After Hypatia has accidentally turned into the Crown Killer, Duke Luca Abele has closed off the institute for the public to use Hypatia for his own plans.

After the chaos in Karnaca has settled, Hypatia is put in charge of Addermire once more and starts cleaning up the mess - including calling back all phials of Addermire Solution.

The Institute is reached via rail coach or via boat. However, as Duke Luca Abele has closed off the Institute to the public and has fortified the dock with a watchtower, the island is inaccessible via boat. The rail coach station leads to the main entrance, where visitors pass a booth before entering the Institute.

The docks are connected to a terrace, allowing the visitors to gaze upon the city on the mainland. From the terrace, the Institute can be entered through the back door.

The basement has been closed off even before the shutdown of the Institute as the sea has started leaking inside. To get inside, the elevator cable needs to be cut, causing the lift to crash through the wooden planks into the basement. Inside is the former Lost Property office, holding several items belonging to the former resident Vera Moray.

Both the main and the back entrance of the Institute lead to the main lobby, presumably used as a waiting room for patients. The main lobby is separated from the stairwell through a wall of light, installed after the shutdown of the Institute. Both the left and the right wing of the Institute's ground floor are accessible from the main lobby, however, part of the right wing is a restricted area and is locked. To open the door, the area must be entered through a window hatch from the outside. This part of the facility has been abandoned for quite a while, allowing grass to spread through the floor tiles. Before the shutdown of the Institute, it seems to have functioned as a storage room, containing many lockers holding food cans.

The rest of the right wing functions as a consultation area. However, as no patients are allowed on the island anymore, the Grand Guard members stationed on the island use the area, both as sleeping quarters and as makeshift kennels for their wolfhounds.

The left wing of the ground floor contains the kitchen and the dining hall, the kitchen being a restricted area as well. In the kitchen, servants prepare the food, mostly fish, for the patients. After the shutdown, kitchen personnel remained on the island to tend to the needs of the Grand Guard members stationed at Addermire. The kitchen can also be reached through a window from the outer area of the Institute. The dining hall is a two story room connected to part of the recuperation area on the first floor. It can be accessed from both the main lobby and from the stairwell.

The first floor contains a salon, the disease treatment wing, and has also access to upper parts of the main lobby. An alarm is located near the stairwell.

The disease treatment wing is locked and can only be opened with Doctor Bartholemeus Vasco's Lab Key. Inside are several treatment rooms, one infested by bloodflies, another serving as an interrogation room for the Grand Guard. At the end of the corridor lies Vasco's office, connected to a small laboratory.

The salon, containing bookshelves, sofas and a piano, was presumably used by the Institute's patients to spend their leisure time. It is located above the dining hall which can be seen underneath through a balcony-like walkway. After the shutdown, the salon has been abandoned, housing only a single guard sawing wooden planks to nail shut a nearby room. This room contains a few desks and typewriters, having presumably been an administrative room.

The stairwell of the second floor directly connects to booths containing writing desks, an especially spacious booth overlooking the main lobby being the matron's office. The left exit of the stairwell leads to the East Terrace, a spacious terrace located on top of the disease treatment wing. Similar to the salon, the terrace was used by the patients to spend leisure time but has been abandoned and is thus run down. There are several telescopes on the terrace, allowing visitors to closely observe distinctive landmarks of Karnaca, including the royal palace. The East Terrace is connected to a smaller terrace on the other side of the building via a wooden bridge over the main lobby. This second terrace contains a wind wheel which has mostly fallen apart as it is no longer in use. The stairwell's right door leads to the labs in the Recuperation Area, which is locked and can be opened with a key obtained in Hypatia's office.

The recuperation area is divided into the lab and the room leading to it. The latter is completely bloodfly infested, with corpses of former patients lying around. The restroom nearby is covered in bloodfly nests as well. In the infested rooms, several sun banks can be found which were used for lumino-therapy for sick workers from the silver mines. Behind the infested area lies Hypatia's laboratory. Separated from the main laboratory are rooms, one seemingly being the Crown Killer's headquarter, including various human body parts nailed to the wall, a message from Luca Abele and a painting made by Delilah. Another room, a smaller laboratory, contains the dying Vasco.

The third floor is smaller than the floors below it, containing only Hypatia's office and connecting the building to the rooftop terrace. On this terrace exists a small building which contains several private rooms for patients. All of them are abandoned and one contains an Outsider shrine.

Hypatia's office contains her desk, another desk full of chemical flasks and, in a separate part, a shelf full of seed boxes. The key to the Recuperation Area can be found on Hypatia's desk.

The fourth floor only contains Joe Hamilton's office at the end of the stairwell. The office is protected by a trap as Hamilton fears that the Crown Killer will attack him. The room contains Hamilton's workshop and his living quarters.

The fifth floor is not accessible by the stairs, only from the rooftops or from the elevator shaft. It is a little maintenance room on top of Hamilton's office, making it the highest accessible room in the Institute. A rune can be found there.

Concept art of the Addermire Institute. 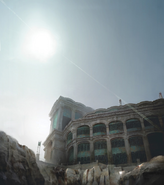 Concept art of a guard standing outside the institute.

Pre-release image of the Addermire Institute.

The carriage at the station outside the Addermire Institute.

A beached boat below the carriage station.

The rooftops of the Institute.
Add a photo to this gallery

The smaller lab near Hypatia's lab.

An advert for the Institute.

The advert in the game.

A map of Addermire Institute from official guide.

A map of Addermire Institute ingame.
Add a photo to this gallery

Retrieved from "https://dishonored.fandom.com/wiki/Addermire_Institute?oldid=169818"
Community content is available under CC-BY-SA unless otherwise noted.