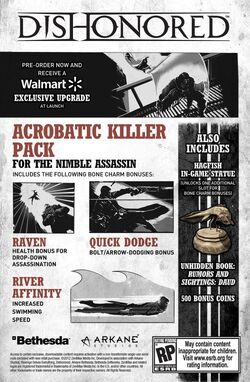 "For the Nimble Assassin"
—Tagline

The Acrobatic Killer Pack is a downloadable content pack that could previously be acquired by pre-ordering Dishonored from Walmart and Amazon.co.uk before the game's release. This DLC, along with the other pre-order bonuses, can now be purchased as part of the Void Walker's Arsenal. The bonus places items in Corvo Attano's room following his initial meeting with the Outsider.

Retrieved from "https://dishonored.fandom.com/wiki/Acrobatic_Killer_Pack?oldid=151574"
Community content is available under CC-BY-SA unless otherwise noted.