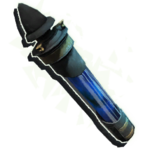 A Second Solution is a book found in Dishonored and The Brigmore Witches.

It is through no fault of my own that the average citizen has expressed a preference for Sokolov's Elixir over my own formula, sold as Piero's Remedy, a name I did not choose if you must know the truth. The public has spoken its usual message of idiocy, spending their coin as a means of selecting Sokolov's formula over mine, which I believe to be equal if not superior.

Much has been made over the popularity of these concoctions as a means to resisting this remarkable new plague. I say remarkable because this strain works with an efficiency we have not seen in the history of the Empire. This plague, now making its way through the City of Dunwall, is unrivaled in its effectiveness. I have studied it within the blood of those afflicted and it is nearly perfect. Elegant, in fact.

And while it is true that Piero's Remedy and Sokolov's Elixir are known to protect the body against the plague equally, my own has properties, not fully understood, which relate to the mind itself, and the spirit. And it is in this way that my formula wins out. Here, is where one should pay attention to this contest. For you see, Sokolov's Elixir, with its emphasis on the brute, animal body, is a crass goo better suited for livestock. The subtle and secret variance in the key ingredients making up Piero's Remedy ensure that it works on the higher functions that separate humankind from the mindless blue-jawed hagfish swimming in the Wrenhaven River.

Retrieved from "https://dishonored.fandom.com/wiki/A_Second_Solution?oldid=140004"
Community content is available under CC-BY-SA unless otherwise noted.