Edge of the World
A Long Day in Dunwall is the first mission in Dishonored 2. In it, Empress Emily Kaldwin is deposed in a coup and either she or Corvo Attano has to flee Dunwall.

Today marks the anniversary of the death of Empress Jessamine Kaldwin, assassinated 15 years ago. Visitors from across the Empire of the Isles have journeyed to Dunwall Tower for the occasion.

Delilah and Duke Luca Abele have taken the Tower. Dunwall is no longer a safe place for you. Escape the city by meeting with a boat captain down at the docks.

Empress Emily gazes at the sky above Dunwall Tower before being led into the throne room by Alexi Mayhew. Corvo joins Emily and they each lay a rose for Jessamine while discussing the anniversary, Emily's worries about being Empress, and the Crown Killer.

Emily sits down on her throne, and Captain Mortimer Ramsey announces that the Duke of Serkonos, Luca Abele is visiting. The Duke enters with two Clockwork Soldiers and his Grand Guard, who carry an enclosed chair into the room. He introduces his gift as 'the lost sister of Jessamine Kaldwin', naming her Delilah Kaldwin; Delilah steps out of the chair. She accuses Corvo of being the Crown Killer and declares herself the rightful Empress. As the crowd reacts in shock, the Duke's soldiers slaughter them. Three traitorous City Watch guards surround Emily with swords drawn, while the few loyal guards are killed by the Clockwork Soldiers. Corvo defends Emily; raising his covered hand, he kills the three traitors in an instant, before he blinks up to Delilah and stabs her. Delilah, unharmed, ensnares Corvo with her own magic, and removes Corvo's sword from her chest before she removes Corvo's mark from his hand. As Emily tries to come to Corvo's aid, Ramsey attempts to restrain her, but he releases her after she punches him.

As Delilah releases Corvo, Emily helps Corvo up, and the two stand back to back, both unarmed and surrounded by guards. At this point, the player is prompted to choose whether to play as Emily or as Corvo.

Once either character is chosen, the game continues from that character's perspective. Delilah will petrify the character that was not chosen, turning them into a marble statue, while Ramsey stomps on the protagonist, incapacitating them. He tells Delilah and the Duke that they will be held in Emily's chambers, then brought to Coldridge Prison to await trial.

As Ramsey carries the protagonist to Emily's room, Mayhew appears, unaware of Ramsey's betrayal. As Mayhew asks Emily or Corvo what happened, Ramsey stabs her with Corvo's folding blade, making a remark while doing so about the lunacy of a sword that folds up. He leaves the blade with Mayhew's bleeding body, and continues dragging the protagonist to the Chambers. He tells them about the legend in the City Watch of the Imperial safe room, said to contain 'enough gold to buy a good-sized island' and steals their Imperial signet ring, intending to use it as a key to open the safe room. He leaves, locking the protagonist in the chambers.

The protagonist can open the windows from inside Emily's chambers, allowing access to the ledge, and then entry to an adjacent room, in which Mayhew is found. Mayhew tells the protagonist to escape via the safe room to the Dreadful Wale, giving them Corvo's sword before dying from her previous injury.

Leaving the area, the protagonist encounters the first enemy, who can either be assassinated or choked to unconsciousness. Hiding him prevents others from being alerted; a good place to do so is the room where the protagonist was locked up at the very beginning (the guard holds the key that unlocks it).

On the lower floor will be a guard in an adjacent room, who will then patrol both rooms. After disposing of him the protagonist can head towards the throne room.

In the throne room Ramsey can be found, accompanied by a couple of guards. They will chat for a bit before splitting up; Ramsey will head towards the stairway leading up, while the guards stay behind. The guards can be neutralized or ignored entirely; ideally the protagonist should stay out of their line of sight as they will notice each other's absences.

Returning to the top floor the protagonist can then face Ramsey, who has gone to the safe room and is admiring his newfound wealth (unless he was intercepted first). The signet ring needs to be taken from him.

Non-Lethal Elimination: Lock Ramsey up in the Safe Room

Instead of killing Ramsey, he can be choked out, taken to the safe room, and locked inside, effectively neutralizing him non-lethally.

After leaving Dunwall Tower via the safe room's other door, the protagonist must make their way from Dunwall's rooftops to the ground level, for which there are various routes.

The primary method leads the protagonist from the rooftops and pipes to the street level near the armory. This area overlooks the main street, with four guards starting their patrols after a brief talk: the protagonist's escape has not gone unnoticed. If the guards are left alone, they need to be taken into consideration if the area is explored. It should be remembered that guards will be alerted if one of their own is missing, and they will start to investigate shortly after they notice an absence.

Continuing to the left of the staircase, the building can be entered through the main gate, but the protagonist should be wary of the guard inside. Checking the journal on the table will reveal this house belongs to Dr. Galvani himself, who remembers Corvo's former shenanigans at his house.

As an alternative route, the protagonist can choose not to climb the pipes down to the armory and instead climb the roof to the pipes' left. Continuing to the other side, they will eventually make their way onto metal supports for a collapsing building. From there they can either drop down onto a passing carriage, cross to the other side into the collapsing building and make their way to the ground through the floors, or climb onto the building's balcony and drop down onto a guard once they start patrolling.

Mayhew being stabbed by Ramsey.

The room where the protagonist awakes.

The massacre in the throne room.

A view from Dunwall Tower.

Aboard the Dreadful Wale, prior to leaving for Karnaca.

A map of the Tower District's streets.

A quick pass by the train (GIF).

A quick pass by the train (GIF). 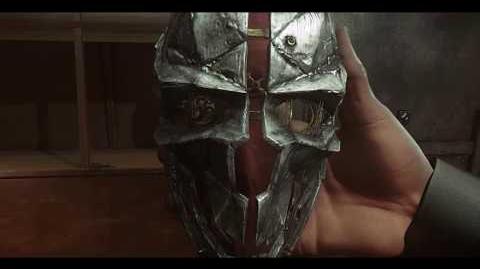 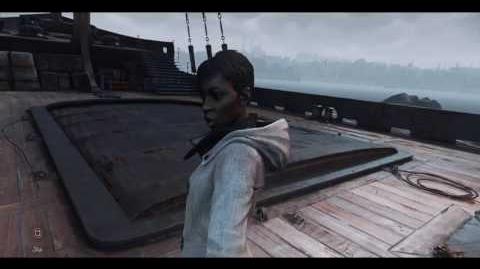